The Triumphs and Challenges of Spanish Translation

So, you want to tap into the Spanish-speaking market? With 500 million Spanish speakers worldwide, translating your web content into Spanish is a bit of a no-brainer. Spanish is not, however, a one size fits all translation. Consumer behaviors and the language itself can vary greatly across the 21 Spanish-speaking countries.

The diversity of the Spanish-speaking people and their language is no reason to shy away from translating your web content. Investments in Spanish translation can increase your customer base, SEO ranking, page views, conversion rates, social media engagement, and brand awareness. In the US alone, there are 41 million native Spanish speakers. Before you dive in and translate your web content into Spanish, however, it’s essential to understand the market and some of the major challenges of Spanish localization.

How Big is the Spanish Speaking Market?

Spanish is the second most spoken language globally and is one of the six official languages of the UN. With over 500 million speakers worldwide, Spanish translation is a must-have strategy for any business wanting to expand globally. Spanish, unlike English, has three main dialects.

US Spanish: There are just over 41 million native Spanish speakers in the US, and the language is largely influenced by people immigrating from Mexico, Puerta Rico, and Cuba. This number is expected only to grow. European Spanish: This includes the Spanish spoken across continental Spain. Even within European Spanish, there are different variants-Castilian (the most widely spoken), Andalusian and Canarian, to name a few. Latin American Spanish: 400 million people speak Spanish throughout Latin America. Mexico alone has almost 124 million native Spanish speakers, and each country has its own linguistic characteristics. 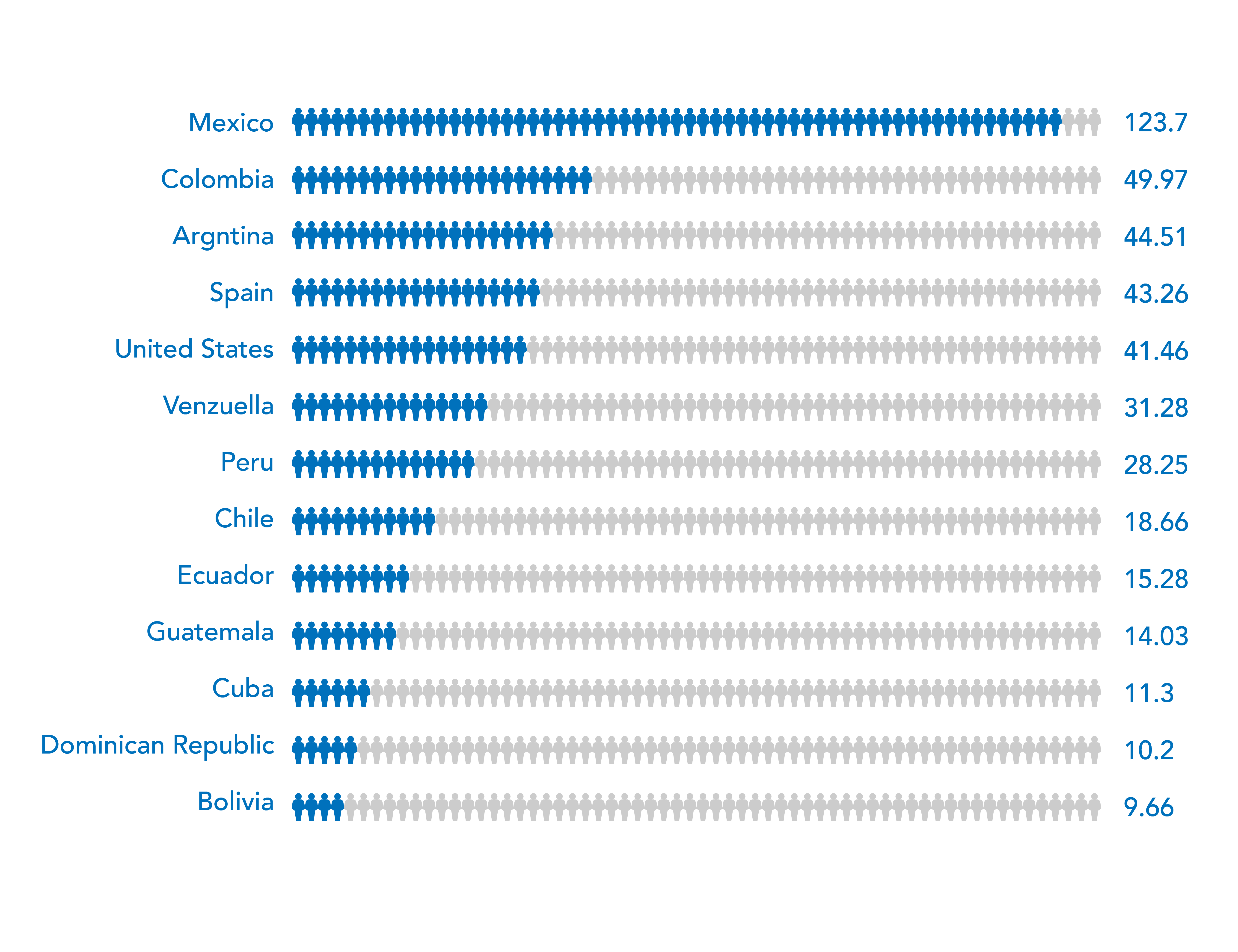 Businesses must know the major cultural and linguistic variations between countries before translating. This makes it easier to oversee quality translations and choose a translator or service specializing in your specific target market.

What Is Localization and Why Is it Important?

Word for word translation will not give your business leverage in a new market. Localization, however, translates the meaning, not the words, and considers the culture, grammar, humor, and context of the source and target language. As the name suggests, localization makes content feel local and considers more than just words. Localization incorporates the:

If you do localization right, your product or service is more likely to be adopted by a foreign market. People feel at home in their own language. 76% of online shoppers favor purchasing products in their native tongue, and, wait for it, 40% will NEVER buy from websites in non-native languages.

Whether you are selling products or services, localization is the most cost-effective way to expand your global reach without opening a physical shop in your desired market. Knowing the localization components is one of the first steps in building a localization strategy for your business.

5 Challenges of Spanish Translation (and tips to overcome them)

Whether you want to translate your website, a literary novel, a software program, or some marketing material, there are some universal challenges when translating into Spanish.

Spanish is spoken around the world, and every country has its own nuanced language and consumption behaviors. Content must be tailored to the specific language, consumer behaviors, and culture for it to be adopted. Terminology, sentence structure, and grammar are different on each Spanish-speaking continent.

Quick Tip: Do market research to determine if and how a country will consume your product. Market research is the first step of any localization strategy. Once you know your product has potential in a market, then it’s time to choose a translator who is fluent in the source language and native in the target language. If you’re targeting Mexican consumers, use a Mexican translator. A person from Spain just won’t cut it. Also, if Spanish is not a translator’s native language, choose another translator.

Spanish speakers use a different pronoun-formal, “usted,” and Informal, “tu,”- to convey the relationship between the speaker and audience. Social media apps or new-age brands may want to target a younger, more informal demographic, and then they would use the “tu.” Products targeting business professionals may lean towards “usted.” With Spanish pronouns, consistency is key.

A 500-word document in English will expand to 600-700 words in Spanish. There is a lot of information packed into a few syllables in English, while Spanish has a lower grammatical density. This can be a translation challenge as you may only have finite space, particularly when translating buttons, headings, or call to actions.

Quick Tip: Ensure your translator is aware of word count restrictions from the get-go. Then, they can translate using a more condensed form of Spanish (if the tone and context permit). Pro tip- decide if your translation fee is based on the word count of the source or target language before you start. As you know, Spanish is around 20% more protracted than English.

English generally adheres to a SubjectVerb(Adjective if there is one)Object sentence structure- “Maria threw the red ball.” Sure, we could say, “The red ball was thrown by maria,” but this is a passive sentence, a structure we should generally stay away from in web content, particularly if that content is to be translated. Spanish word order, however, is more fluid than in English. Context and what you want to emphasize dictates a sentence structure. Adjectives commonly come after the noun, so “red ball” would translate to “La bola roja” or “La bola de roja.”

Quick Tip: Nuanced sentence structure can only be translated effectively if your translator is fluent in the source language and is a native Spanish speaker. If consumers in Spain will be reading your content, choose a translator from Spain. It may be more expensive, but you won’t risk alienating your target market due to some clunky or foreign sentence structure.

In Spanish, nouns are assigned a gender. Don’t be fooled. Some nouns that are generally associated with females can be male. “Un vestido,” or dress is masculine. Gender attaches to the noun, not the person. “La persona,” or person, is female, even if you refer to a male. Some nouns, however, have both masculine and feminine forms. “Amiga” and “amigo” means friend and is dependent on the person’s gender. As you can see, gender is a tricky one to master.

Quick Tip: You guessed it. Work with a professional translator fluent in the source and native to the Spanish-speaking country that is your target market. If you want to double-check the genders within translated work are correct, use a Spanish gender guide or run the word through google translate.

How to Choose the Right Spanish Translator

Spotting a good translation service can be tricky, and no two are the same. Do your research. Understand their translation processes. If you can, find out who your translator is, their background, previous projects, and their native language and region. A translation mistake can cost your company millions and ruin your reputation in a specific market. There are a few must-haves you should look for in a Spanish translation service.

Native in the Target Language

I’ve said it three times, and I’ll say it again. Choose a translator who is fluent in the source and native in the target language. They will be best equipped to tackle the nuances of sentence structure, terminology, tone, and humor.

Although machine translation is improving, it still will not provide a translation that feels natural to the target market. Human translation makes the text feel human, and you can have a dialogue with your translator to provide them with relevant market research and content style guides.

Make sure the agency has skilled Spanish translators and who have worked on projects similar to yours. Each industry has its own terminology, so use a translation service with industry experience. The more technical your industry, the more of a priority this is.

A translator with 20 years of experience will likely be better than a person who just graduated with a translation degree. Look for an agency that vets their translators.

If you need to contact your translator to provide further context, market research, or provide details on specific terminology and style, you don’t want to wait days. 24/7 customer support ensures any challenges can be overcome in minutes or hours rather than days or weeks.

This technology remembers previously translated text or phrases. It allows you to build a style guide for future translations and makes terminology consistent across your content. If you are localizing more than just a couple of pages, TM is a must.

When searching for a spanish localization service, why not start with the world’s fastest, lowest cost online translation service that’s built on human collaboration.

Get Free Translation Consultation From